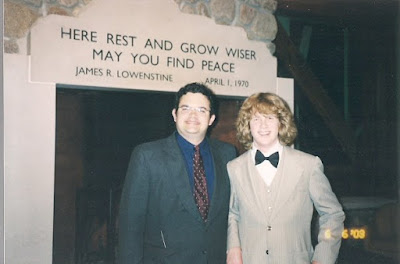 I have to explain my high school situation a lot. It usually goes something like this:

Where’s that? Is that where they make the butter?
[Holds out palm to make a rough Wisconsin map, points to place between middle and pointer finger] No, that’s in Minnesota.

Boarding school? Why would you want to go there?
Well, my dad worked with the mom of one of the technology managers there. We toured and thought it would be a good fit.

Why did they build a boarding school in Land O’Lakes?
Basically, the head of Central Steel and Wire in Chicago left all his money and all of his land to make a school focused on the environment.

Was it all boys?
No.

Was it religious?
No, it was “environmentally-focused.”

Did you miss home?
At times, but I really enjoyed living there.

Do you still go up there?
Well, the school isn’t the same as when I went there. There was a lot of politics and alleged financial issues related to the management of the money. So, in 2009 they decided to switch it to a semester boarding school for high school students. It was pretty controversial, they laid off about 75 percent of the teachers, but it seems to be doing all right now.

And this is the short form of the conversation. I could dig deeper into the classes, the teachers, and the controversies, but I find that stuff is usually pretty heavy and detailed for happy hour chatter.

This year would be my tenth high school reunion. I’m guessing there won’t be any sort of party or reunion to mark the occasion. I thought about making a visit last spring, but a family matter prevented me from making the trip. I’ve seen advertisements for alumni weekends, but those haven’t made me want to go. Maybe it’s because most of the people I’d want to see would probably not be there. There are also a few staff members who still work there that I’d rather not see again.

And, well it feels weird to write 10 years after leaving, everything that went down still feels raw. People were hurt. Lives changed. I think most just moved on.

I know there is still animosity from students and former staff towards things associated with the school. I highly doubt it will ever dissipate to a point where the hundred or so of us would all be willing to return to campus for a reunion. It makes me sad, but I really don't know what can be done about it.

I don’t see a whole lot of people from high school anymore. I keep in contact with only a handful of friends and teachers (who I now also refer to friends.) I wish I was closer with more people, but time and distance has prevented a lot of that from happening. And lack of a gathering place or event doesn’t help matters.

I’ll be honest, I like to make fun of people who haven’t moved on from high school. I’ve learned that there are things more important in life than who you were between ages of 14-18.

Except, I wish I could settle those important things that happened to me in high school.