I had my eye on Maison Darras for a while. It’s on the corner of a prominent skyway location in the 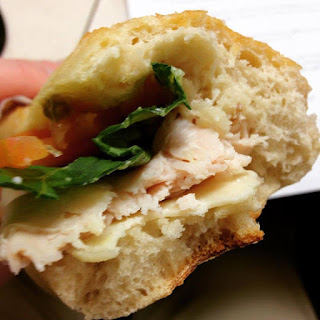 Baker building. The menu caught my eye when I walked by it one day. Also, I had no idea what the name meant. (Turns out, it’s owned by a french couple, whose last name is Darras. Masion roughly translates to “homemade.”)


I had a lunch meeting that day, so I snuck out of my office while listening to the Allman Brothers song “One Way Out.” (That would make for a great heist escape soundtrack to a movie. Seriously.)


There wasn’t a line, which is something I always appreciate. The menu was pretty simple: paninis, salads, and sandwiches. The decor was sleek and minimalist.


As I have said before, the bread is the key to the whole thing. If it’s too mushy, the whole thing just doesn’t come together. If it’s too big, then it dominates the rest of the ingredients. It has to act as a good delivery system, while also adding it’s own flavor to the mix and not overshadowing the other parts of the meal. It’s a tricky balance to strike, but it’s awesome when it comes together.


Usually, I go for wheat bread. It’s safe, (somewhat) healthy, and I like the taste better than white bread or rolls. (Don’t get me started on wraps.) MD had an unconventional grain delivery system: a baguette.


I’m a little weary of trying crunchier breads ever since I got my first root canal. They hurt my jaw and my teeth if I chew too much. However, this one was crusty, but not too difficult to work through.


I ordered the turkey, swiss, lettuce, and tomatoes. I usually don’t go for swiss, but I don’t like messing with preset menus unless it’s something I really hate. The whole thing cost $7.19 for just the sandwich itself.


I put the “One Way Out” back on my iPod as I hurried back to the office. It was a hefty sandwich. I probably could have done curls with it. The whole thing was about a foot long, like legit a foot long.


It hit all the right notes. The turkey had a slight smokey taste to it and the veggies all tasted fresh. The texture of the meat was spot on. It was thinly sliced, but it was not slimy. While the bread was thick, it didn’t really make me feel like just lying around afterwards. It was light, yet filling.


I always prefer mom and pop places over chains. I’d rather support a local business and I think they usually have better quality ingredients. Maybe I should go back and talk to the owner about Zlatan! (One of the best soccer players on the planet, plays for a French Club. ((Not a sandwich, a soccer club)))


I would give this a four out of five. I’d come here again if I was meeting a friend to grab some sandwiches to head out for the day or something. The taste, heft, and value all got high marks. The cheese also didn’t taste too swiss-y. The sign of a good sandwich is when it all comes together. And Maison Darras did just that.