I’d been eyeing Allie’s Deli just about since I started my new job. It’s in a convenient location in the Rand Tower. The lines are usually long when I pass by over the lunch hour. I tend to have favorable 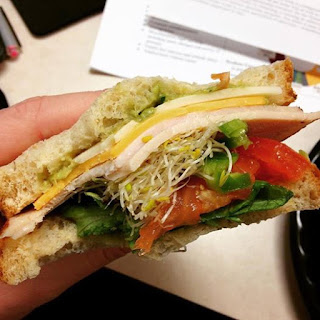 impressions of places that have a name in front of the word “deli.”


I went there around 11 a.m. to avoid the line. I was impressed by their sandwich menu. They had 16 different specialty sandwiches along with a “build your own” menu. I went right up to the line and got the California Turkey. This one had lots of veggies. LOTS: Tomato, green pepper, cucumber, sprouts, and lettuce. They also put swiss and cheddar cheese on there.


I’m always one for speed and efficiency, but this one was done almost too quickly. It was less than a minute. Seriously, I was just staring at the menu and they called my name.


I grabbed a bag of Old Dutch Jalapeno Cheddar Chips to go along with my meal. It surprised me that they were legi 99 cents. I appreciate that.


The weight of the sandwich felt good. I thought I’d be getting my money’s worth of vegetables. I went back to my desk and unwrapped the wax paper. It was colorful and varied. It had some good heft, as I like to say.


The first bite tasted like the produce aisle. It was all crunch. Just about the whole bit was filled with veggies. Now I really like veggies, especially on my sandwich. But if I wanted that many, I would have just ordered the friggin veggie sandwich. (Or a salad)


I examined my sandwich and saw only two slices of turkey. Two! That was an unacceptable ratio of protein to vegetable. I could barely taste the turkey.


From a texture standpoint, it wasn’t bad. It was good crunch. The bread didn’t fall apart and was the appropriate amount of chewiness. And the cheese tasted fresh. However, winter tomatoes are just an absolute buzzkill. The ones on this sandwich were kind of white and mealy. They were basically getting disintegrated as soon as they reached my mouth. Yuck.


There also wasn’t much for condiments on this one. They said there was guacamole on there, but heck if I could find it. Again, that’s probably a commentary on our food system, should we really expect delicious veggies in the middle of January? (Well, maybe with global warming we will.)


I was a little disappointed in Allie’s deli, to be honest. I’ll give it a 2.5 out of 5. The idea behind it is good, and I’m sure they’re business model is working, but I’d like a little more effort in the sandwich production department.
Posted by Nick Hansen at 5:04 PM