I wasn’t going to order a turkey sandwich this time. I was out at a law firm and I thought I’d pick up 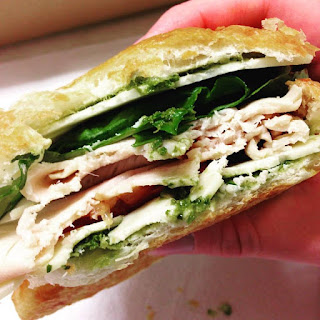 something healthy, or even possibly vegetarian, at the People’s Organic Cafe, located in the IDS tower. It was Thursday. I was dragging and I thought a good shot of something crunchy and full of vitamins would give me the shot I needed to get through the rest of the day.


And then I saw it, the roasted turkey and pesto sandwich. Since it’s my duty to review all matter of turkey sandwiches when they present themselves, I felt like I was obligated to get the sandwich.


I hope those artisan breads got paid well because one of those sandwiches set me back $11.06, by far the most expensive sandwich I have sampled thus far for the Turkey Club Club.


I got the sandwich with a side of coleslaw. (I’m still trying to cut down on the chips.) The first thing I noticed as I walked back to my office was that it was hefty. Good sign.


I got a few paper towels and an article on how Limited Liability Companies are passed down after a sudden death (riveting stuff) and I dug in.


The first thing I noticed was the croissant. Good gravy, why aren’t more turkey sandwiches served on croissants? Those artisans did a heckuva job. It was soft, flaky and quarterbacked the rest of the ingredients well.


The turkey was optimal. It wasn’t too salty and it wasn’t slimy. The lettuce was fresh and crunchy as well, but I had a hard time finding the tomatoes. They were there, but I don’t remember them. I think they were hiding underneath all of the lettuce.


I’m divided on pesto. I had a few comments on pesto. I was a little hesitant about it. I love pesto on pasta, but on a sandwich? It was fine, but I don’t think it was a game changed. The cheddar and the pesto worked okay, but I think it would have worked better had it been mozzarella cheese to go along with a panini. I would be willing to try pesto again, but I’m not going to let the green stuff on the sandwich every day.


Overall I’d give it a 4 out of five. The ingredients were fresh and the croissant was a game-changer, but I don’t think I can shell out over 11 bucks for a sandwich. That’s just not practical for my budget.


I realize I’m a little behind with some of my write ups and I apologize to you, dear reader, for the delay.


Off the top of my head, here are all the places I’ve tried in Minneapolis:
Potbellys
D’Briens Deli
Which Which
Real Meal Deli
D’Amico and Sons
People’s Organic Cafe
Turkey to Go
Brothers’ Deli


The top three are as follows:
3. Which Which- I was pleasantly surprised by this chain restaurant. I liked the ordering method, where you mark what you want on a bag and they put it together for you. The meat, cheese, and veggies were all better than your standard chain restaurant fair.  It’s definitely one of the best sandwich chains on there.


2. D’Amico and Sons- Just absolutely fantastic, fresh ingredients that worked together well. The bacon and arugula were solid touches.


1. D’Briens Deli- This is the sandwich I have been looking for. The ingredients all clicked well together. The price wasn’t bad and it wasn’t too fancy. Just a dang good sandwich.