Have you ever been to a bar that’s trying hard not to look like a franchised-type place? They keep the decor low key. They make their food to match with current culinary trends (sliders, anyone?). They offer local micro-brews. Yet, somehow it doesn’t work. Even though the place has all the ingredients for a good bar, it still somehow ends up feeling soulless. I hate those types of places. 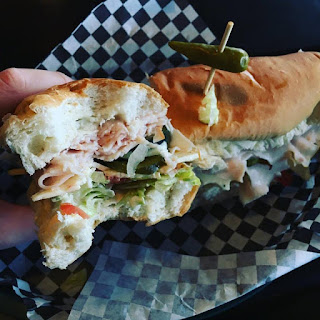 Give me something authentic.

Fat Chance sandwich shop caught my eye a few weeks ago when I saw an article on the City Pages website about the place. They help provide work for chronically homeless people, and they also make really good sandwiches. I’m always willing to give community-minded restaurants a chance, so I thought a Thursday lunch would work perfectly. I made the drive up Highway 169 to the location. It’s located in a strip mall across the street from North Hennepin Community College.

The first thing I noticed about the place was that it was sparse. It had an industrial feel to it. There were three long picnic tables and a couple of booths. There was a concrete floor and one counter where you order. The sandwiches all had names that were just off the ordinary: the Conveyor Belt, the Chef Sam, the Haystack. I went with the Chef Sam because it was the only one with turkey as the main meat. It came out to $10.69, which is on the pricier side, but I later learned that the portions of the sub would make it worthwhile.

There was a group of three women sitting across from me, and two other men who had come in for solo lunches. I waited about five minutes before a guy who looked like he could have played offensive tackle for Vikings came out and delivered my sandwich. First thing, it was huge. It was on thick white sub bread and it was about a foot long. I knew I’d only be able to eat half of it.

One thing I’ve noticed lately is the proliferation of huge sandwiches. I love a sandwich where you get good value, but some of them are kind of ridiculous. A few weeks ago, I ordered a turkey club from Murray’s (one of the nicer restaurants in downtown Minneapolis) and it was literally about two inches of just meat. There wasn’t much else on it. I thought it was a bit much.

At Fat Chance, however, it worked. There was a good mixture of meat, veggies, and bread. The meat tasted fresh. Normally, I’m not a huge fan of white bread, but I got it this time. It held everything together well. I got everything on it, except for the mustard. It came with cheese, lettuce, tomato, onion, cucumber, pickle, and mayo.


There wasn’t anything too special about this sandwich. No fancy sauce, no secret way to cook the turkey, no special type of arugula. It tasted great anyway. My favorite sandwiches are the ones that can combine a ton of ordinary things and they end up tasting delicious. I’d highly recommend coming hear to check it out. It’s a place that doesn’t try too hard to something it’s not.
Posted by Nick Hansen at 12:50 PM