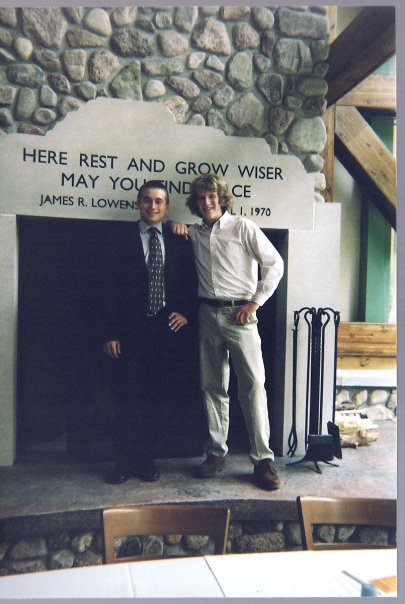 As I was sitting on the train home from Chicago yesterday, I realized something. Greg Mlynarczyk is one of the few people who has witnessed my high school to college to adulthood transformation. I don’t have very many “lifelong” friends, meaning I keep in touch with very few people who knew me prior to high school. I know a few, but my contact with them is sporadic at best. However, Greg has known me since my first day of high school fourteen years ago. I don’t know too many non-family members that I’ve kept in touch with for that long.

I see Greg about once a year and we text or social media message sporadically. (There’s the occasional phone call is well, but remember, this is 2016 people.) We’re both different people then we were back in high school. We’re a little bit less rambunctious. We don’t plot out schemes anymore. We’re also not stuck in the middle of the woods.

Greg has settled down into life in suburban Chicago with his wife (and high school sweetheart) Megan. He’s got a good job for a software company and is recovering nicely from a knee injury he sustained last year.

Sometimes I worry that I won’t be able to reconnect with old friends. I worry that we’ll run out of things to talk about or that we’ll spend so much time reminiscing that we’ll wonder if that’s the only thing we have in common anymore. I worried about that with Greg, but luckily, the feeling passes after a few hours. We chatted, we drank, we watched our favorite movie, Grumpy Old Men. It was a good hang out time full of conversation, as well as some silences. With old friends, you don’t have to always fill the silences.

My favorite thing about Greg is that he’ll tell you if he’s upset. He won’t say things like, “I’m disappointed,” when he really means he’s pissed off. If he’s upset about something you’ll know it. And he doesn’t just talk the talk about it. One time he was so upset about our school’s electronic check in for curfew, that he hacked into the system and made it say he was in Hawaii. He’s the type of guy who may slack at times, but when he has his heart in something, watch out.

There are not too many people in my life who can empathize, understand, and analyze what the whole Conserve situation meant to all of those who went there. Greg probably knows me best from those days. As much as I love my college and post-college friends, they still sometimes have trouble wrapping their heads around what Conserve School actually was.

I’m flashing back to my senior year of high school. Many of the teachers we cherished were gone, as were the classmates we looked up to. Greg and I sat on a log outside of Donahue house after convocation and wrestled with those facts. The dean of students stopped by and talked to us about what we wanted for the upcoming year. I don’t remember what we said, but we both felt like we wanted to leave a legacy and make sure we left Conserve better than we found it. (There’s debate on whether we did that.)

I think Greg and I just bullshitted for a while. Maybe we were waiting for our significant others. Maybe we just didn’t want to be in the wing. Maybe we were testing out some expansions of our curfew policy. Whatever it was, it was a good, hopeful feeling.


You’re not going to have life changing adventures with every friend you have. Some are just there throughout your life. They know you and, even if they don’t show it directly, they care about you.  That’s Greg Mlynarczyk for you.
Posted by Nick Hansen at 8:01 PM