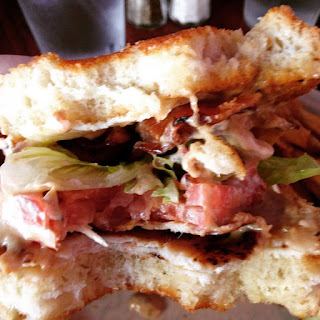 I got a lot of hype for Melt’s prior to my trip to Cleveland. A couple friends of mine who had gone to school in the Cleveland area told me that Melt’s was THE place to go for a good sandwich in northeast Ohio. My cousin also told me about it on Facebook, saying that we should go when I was in town. (I didn’t realize that they were talking about the same place until I posted the sandwich pic on Instagram.)

I went on Friday afternoon for an early lunch with my aunt and uncle to the location in Cleveland Heights. The first thing you notice is all the crap on the walls: a huge Dairy Queen sign, metal traffic signs, photos of Cleveland sports heroes, and lots of other junk. I loved it. The second thing you notice is the menus: they’re all printed on the back of album covers. Love it.

The third you notice is all the options: there were at least two dozen different options. Melt’s does speciality grilled cheese options, and it does a lot of them. I didn’t realize there were so many ways you could grill a sandwich.

Luckily, I quickly scanned the menu and found what I was getting: the **roadhouse** club. It was a classic club with turkey, bacon, lettuce, tomato, onions, and a special sauce. My aunt and uncle got the special of the month, the Sanchez: a sandwich with an enchilada, cheese, refried beans, and vegetables in it. (I’m always a bit skeptical of one meal inside of another.) I only got half a sandwich. I would have gotten a whole one, but I had other stuff to do that day, namely, run around with my little cousins. (Unlike most other times, I really didn’t want a food coma.)

About 20 minutes later, our sandwiches arrived. They were huge. Half the size of my head, at least. Everything checked out at first. Good size, good mixture of ingredients, good stability. First bite, good mixture of tastes.

However, there was one problem with the sandwich, and it relates to a larger issue within the sandwich community: the tyranny of bacon. Now, I love bacon, but unless you’re having a BLT, it’s a sidekick to the starring meat. Otherwise, wouldn’t you just be ordering a bacon sandwich with turkey on top? There was about twice as much bacon as there was turkey. I wanted more of the bird. I love you bacon, but seriously, you’re becoming a really needy meat, needing to be the star of everything. Just slow down a little bit, you’re a great addition to things, but you’re not always going to be the star.

I also wanted slightly more melty cheese. When a place sells you on it’s cheese, it really needs to go all out on it (see my previous entry for Cheese Boy.)

Overall, it was a very good sandwich. Four out of five, easily. The texture, size, and taste was just right for a sit-down lunch with my aunt and uncle. I’d go back and see what else they have. Cleveland, you didn’t disappoint.