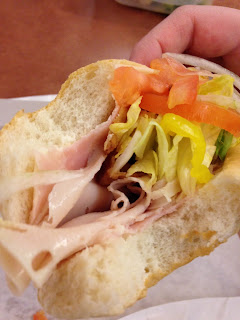 I had my eye on Twin Cities bites for a while. As I made one of my daily walks through the skyway, I noticed it from the second floor of the Soo Line building. I didn’t know the name of the place, but I did see the word “Sandwiches” painted on the glass. So, naturally I had to go. I chose to go there on Friday because I was meeting my friend Matt for lunch. He brought his lunch, so I figured the food court would be the best option.


Everything looked promising as I walked into the building. The line was short, the prices were good, they had a turkey club on the menu. It looked like it was a husband and wife team working, something I give bonus points for. The man working was a friendly guy. He was talking about the first round of the draft and was happy with the Minnesota Vikings’ pick. I politely smiled and nodded.


I ordered the turkey club. The guy was so happy that he had to ask what my order was three different times. I got it on a sub (I’m not quite sure why, I’m not always a big fan of turkey club subs, but that’s for a different blog post). It had turkey and ham (which I’m not always the biggest fan of), lettuce, tomatoes, mayo, banana peppers, and onions.


One thing that immediately caught my eye was the iceberg lettuce. I don’t mean to be a snob, but most iceberg lettuce is kind of gross, especially when it’s stuffed into the the bread and it overtakes everything else in the sandwich. It just dominates the taste in a way I don’t like.


One thing I did like was the price. I think it came to $5.35 for the solo sandwich. Not a bad price. It was decently packed with meat and veggies.


The good part about the lunch was that I had good company. And the fact that Matt was intrigued by the whole process of how I judge the sandwich.


Funny enough, i saw my former state representative in the skyway the day before. He now runs an energy consulting firm downtown. We chatted for a little bit and he asked what the best place for a turkey sandwich was downtown. I said that it was the Macy’s food court.


We occasionally have had Facebook interactions, but not serious conversations in a while. I thought it was pretty funny that sandwiches came up pretty quickly. I’m pretty okay with that.


I’d give Twin Cities Bites a two out of five. There’s an A for effort. I’d imagine that being a family-run lunch place isn’t easy. I would be willing to go there again, but I probably wouldn’t get the turkey sandwich.