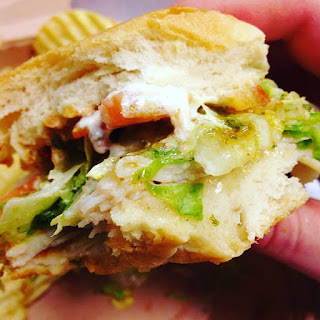 I went to Dagwood’s with high hopes. It had come to my attention that NBA player Matt Bonner AKA
“The Red Mamba” had visited there when his team, the San Antonio Spurs” played the Minnesota Timberwolves. It turns out, Bonner has a sandwich blog as well. Any place that gets profiled by a NBA player, one of the most in-shape people on the planet, is all right by me.

Matt said this of the Turkey Dagwood on his blog, “I definitely plan to go back to Dagwood's next time we play the Timberwolves.  I wouldn't say it's the Hoagie Grail, but the "Turkey Dagwood" was one of the best sandwiches I've had in a long time.” I had to go try it out myself

Thursday was going to be busy for me. I was coming to the end of two big projects and I also had a big meeting that day. My boss, who normally sat in on those meetings, would not be able to make it. Those meetings happened over the noon hour and lasted till about 1:30 or 1:45. I knew lunch wouldn’t be happening. I needed a sandwich to keep me going.

I made the trek via the skyway to the building where I had passed the restaurant many times. I usually take a walk over my lunch break (which means I unhealthfully consume the turkey sandwiches at my desk) and my interest had been piqued by the place before.

I was the only one in line at 10:30. I got my order in right away. I was a little nervous because I didn’t want to get back too late to the office, and it was about 10 to 15 minute walk there.

After waiting what seemed like another 10 to 15 minutes, I finally got my sandwich. I rushed back and wondered whether I should eat it before or after my meeting. Since I get cranky if I don’t eat, I decided on before the meeting. Looking back, I don’t know if it was the right choice.

One of the reasons like sandwiches is that they are compact and easily transportable. This one was a mess. I would have eaten at my desk, but I didn’t want sandwich oil and chips all over my workspace. I went into one of the conference rooms to eat. I made a mess.

The first thing I noticed was that it was soggy. The thing seemed like it was doused in sandwich oil. (Which was Matt’s favorite part of the whole thing.) Normally, I don’t mind a little extra oil on the sandwich, but this one was disgusting. It got all over my hands and even a little bit on my shirt. I don’t remember much about the turkey or the vegetables because I was so upset with getting my lunch all over myself. (I swear I’m not usually this messy.)


I had to disagree with Mr. Bonner’s verdict on Dagwood’s. While the sandwich was big and went for a reasonable price (It was about seven bucks), I didn’t enjoy it as much as he did. I don’t like messes and I don’t like feeling like I have to clear out a five foot radius when I eat something. I like quick, clean, and convenient, all of which Dagwood’s was not. I give it one out of five stars.
Posted by Nick Hansen at 12:02 PM