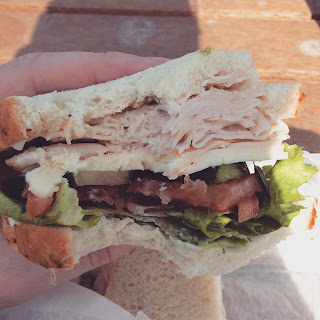 You know that feeling where you experience something for the first time, but you feel like you’ve known it your whole life? Yeah, that’s the Como Club from Nelson’s Cheese and Deli in St. Paul.

That sandwich had the right amount of heft, filled with fresh veggies, and was constructed in a way that made it portable, while also being delicious. And while the sandwich was great, the whole atmosphere of the day made it even better.


I usually eat my sandwiches at my desk in a little bit of a rush so as not to get crumbs and bits of turkey all over my cubicle. Luckily, I could slow down and enjoy myself today. My girlfriend (!), Katie wanted to take me to Nelson’s and then go for a walk around Como Park. Pretty much a perfect day if you’d ask me.

It was sunny and in the mid-60’s. Basically, the ideal spring weather. We drove to Nelson’s first. It’s a little corner shop on Como ave. As soon as I walked in, I knew I’d like it. (Of course, it’s hard not to like a store with cheese in its name.) There was a line for salads, sandwiches, and cooler full of drinks, cheese curds, and desserts. The menu had about 20 specialty sandwiches. I decided on the Como Club because it sounded awesome: Thinly Sliced Turkey Breast, Bacon, Chive Havarti on Vienna White Bread with Lettuce, Tomato, Cucumbers, and Ranch Sauce.

Katie got the Reuben sandwich. I was a little worried about her choice, but she paid for lunch so I didn’t say anything. (Yeah, maybe I’m burying the lede here, but Katie has found the way to my heart… through sandwiches, obviously.)

However, the Reuben took about 10 minutes longer to make, which I thought was a red flag about the whole thing. Also, I think reubens should be enjoyed with a tall stout and a side of french fries in an Irish pub, but that’s a whole different blog post.

It seems like it should be so easy for sandwiches to always make an optimal sandwich consisting of meat, cheese, bread, and veggies… but some just don’t know how to do it. Nelson’s does. The veggies were fresh and cool. They didn’t come apart as soon as I bit into the bread. The turkey was not slimy and the bacon provided a nice salty compliment to the rest of the sandwich.

The key was the bread. I don’t often get Vienna white bread, but it’s got pretty good holding power for the whole thing. I usually get wheat bread for my sandwiches because I have some misguided notion that wheat is always better than white, but I would have been wrong in this case.

We made our way to the park to eat our sandwiches on a picnic bench. I sat there smiling like a buffoon while I thought about the Como Club I was about to devour. And oh man did it deliver. It wasn’t messy. It was delicious and easy to enjoy, as warm spring days with people you care about should be. Five star sandwich.