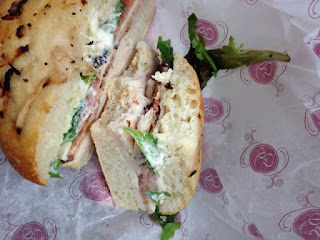 It’s not been an easy week, especially for Minnesota sports fans
So in the middle of that week I realized that I needed something tangible and simple to bring me back to earth. And of course, that was a turkey sandwich.


I went to D’Amico and Sons, an Italian eatery that has locations all over the Twin Cities (also, weirdly, in Florida). I was a little nervous because the only thing that could derail me from getting a turkey sandwich is a long line and lunch time is a crapshoot in downtown. However, the line moved quickly, but another thing made me pause, pre-made sandwiches. I was a little skeptical because I didn’t know how long they had been out there.

After I paid for my sandwich, I made my way to the plaza where I like to have my lunch and took it out. There was some good heft and it was compact, so it was fairly easy to eat. I appreciate that in a sandwich.

The bread was on an onion cibatta roll that had an ideal amount of chewiness. That’s really the key to the sandwich, if you have bad bread, it’s really an uphill battle to impress me. It also had arugula, bacon, tomato, cheese and some sort of balsamic mayo.

The presentation was very good, or as my agate desk friend Adam said, “Copy-fit on-first-paste.“
I took a bite and boy was I impressed. The bacon was smoked and really worked well with the balsamic and arugala. My one knock on this sandwich was that it cost $10.29. However, it was one dang good sandwich.

I’d give it a 4.5. It’s a top-five sandwich for sure, but it’s not quite the LeBron of sandwiches. It’s like the Russell Westbrook of sandwiches. Really, really good and really impressive, but still doesn’t have that one thing to bring it all together.

I'm still searching for that one thing.