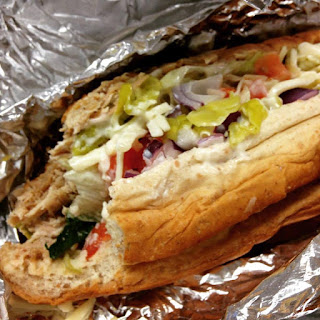 I think we'd all like to believe deep down that what we want is what's best. At least, that's how I feel when I order a turkey sandwich. I want the turkey, tomato, onion, pepper jack cheese, and peppers topped with mayo on some sort of whole wheat bread. The combination has rarely failed me, so that's what I get most every time I have the option to choose the toppings.

On Friday, I decided to try out Turkey to Go. I passed by it every day on my way to the bus stop. I mean it has turkey in the name, so it was a natural stop. It's slogan was "The tastiest bird in town."

I had to sit in on something over the lunch hour and I really didn't want my hangry level to go up, so I decided to run their quick and eat the sandwich at my desk.

Luckily, I got there before the lunch rush came, so there was no line - a definite plus. The options for bread were limited: hamburger buns, hoagie buns or wraps. I went with the hoagie bun.

As I've said before, the bread is really the key to the whole thing. It's kind of like the quarterback, it has the most important role in the sandwich. It's a delivery mechanism that also provides texture and flavor. No other part of the sandwich has that many roles.

(To continue the football metaphor, the turkey is the running back. It really is going to do most of the work. The veggies and cheese are the wide receivers, they provide zip and flash to the whole thing. And the condiments are the offensive line. They may not get the most attention, but you'll notice it if they're gone.)

I got the standard order, but these ingredients were slightly different than the normal deli counter. First, everything was chopped and the cheese was shredded. The turkey was shredded as well. I don't mind hot turkey, but I've noticed that hot sandwiches are usually the messiest ones.

It cost $7.14, which was one the lower end. It passed the heft test. I felt like I was getting optimal sandwich proportion for my money.

I went back to my desk and unwrapped the aluminum foil. After my first bite, I realized that this lunch was going to be like a Van Halen reunion. It just wasn't going to work well together. Nothing was bad on it's own, but the combination was just off.

The bread got soggy real quickly due to the turkey and the veggies/cheese just wasn't combining well. The turkey was high quality, but it was like thanksgiving turkey. And the normal deli mixture just doesn't quite fit with that sort of turkey.

As I chewed, I thought to myself, "Man this would be a great post-Thanksgiving sandwich." It would be great with potatoes, cranberries and the like. I saw that the advertised a turkey sandwich with brie cheese and cranberry. I think that'd be pretty good.

I'd give Turkey to Go two stars. It was fine quality, but it just didn't come together.

I came to Turkey to Go thinking my way to order was the best way to get a sandwich, that's not always the case. Sometimes you have to be willing to be flexible, even with your turkey sandwiches.