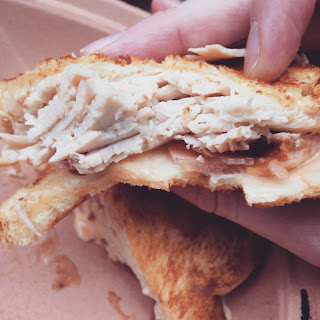 We all get disappointed from time to time. It's just part of being human.

I had real high hopes for Brothers Deli. It is alwasy bustling every time I walk by over the lunch hour.

I tried it last week, hoping for a solid deli sanewich.

There were lots of sandwich choices on the menu that took up nearly an entire wall behind the counter. I like places that refer to themselves as a "deli" especially ones that have unpretentious names like "Brothers."

I saw that they had nine varieties of turkey sandwich. NINE. Wow. I decided on the Turkey Clubhouse because, well, it is the Turkey Club Club after all. The line moved fairly quickly, which was nice. I paid $8.85 for sandwich only and headed to my normal spot in the IDS tower plaza.

I sat down and took out the sandwich. There wasn't much heft to it and was kind of flimsy. I suspect that it was because the bread was toasted. (That isn't necessarily a bad thing, but if it is toasted, it has to be toasted well.)

The bread was greasy, again, not a bad thing, but it didn't make for the type of sandwich I favor consuming on my normal lunch hour. I like stuff I can eat quickly and not have to worry about making a mess. As my friend Steve pointed out with a Facebook comment "That's a mess." It was.

The Russian dressing wasn't bad either. I usually prefer spicy to sweet on my sandwich, but it worked in this instance.

Overall, the bread was pretty good. The taste was better than the texture. A little too greasy, but it worked all right in this situation.

However, a lot of things left me unsatisfied afterwards.

The sandwich was coming apart as I ate it. I really don't like that. My sandwich is not an ice cream cone. I shouldn't have to worry about my lunch getting all over my hands.

It felt like something was missing with this sandwich though. Maybe it was a plate of fries, maybe it was some lettuce in the middle. Overall the turkey, bacon, tomato, swiss and dressing just felt a little empty.

I'd give it a 3 out of 5. I'd be willing to try the place again, but I'm not going to be raving about the place to friends and family.

What did I learn from Brothers Deli? It's good to have a bit of skepticism about everything, including your turkey sandwich.