500 Letters: My letter to Mike Huckabee 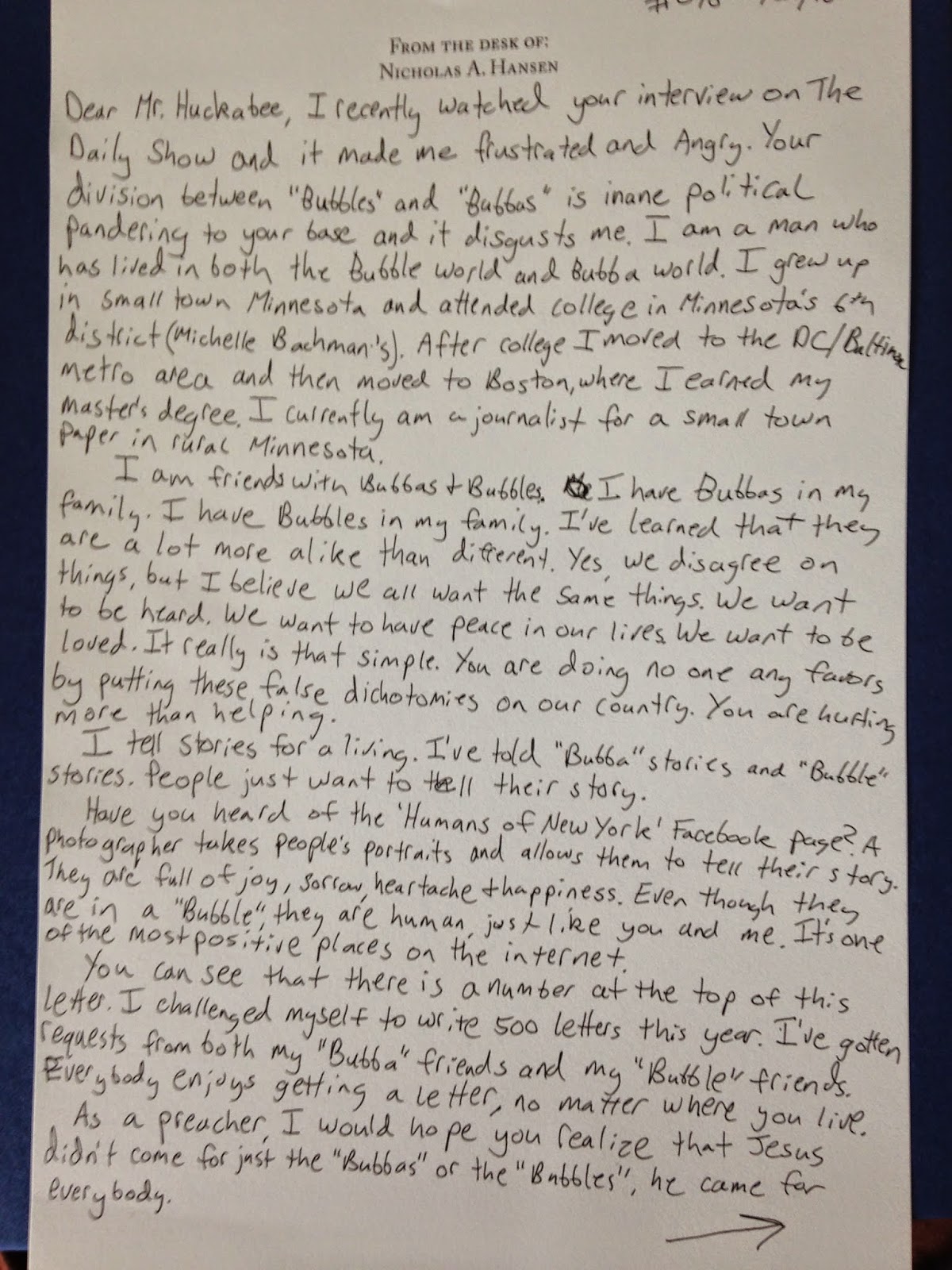 My first "angry" letter. This is in response to Mike Huckabee's recent interview on The Daily Show with Jon Stewart. It was maddening. Through writing a few letters, I've learned that people don't care where you live or what you believe, as long as your are a kind person. Mr. Huckabee doesn't seem to get that, or at least that is what he is portraying.


------
Dear Mr. Huckabee,
I recently watched your interview on The Daily Show. It made me frustrated and angry. Your division between "Bubbles" and "Bubbas" is inane political pandering to your base and it disgusts me.

I am a man who has lived in both the Bubble world and the Bubba world. I grew up in a small town in Minnesota and attended college in Minnesota's 6th district (Michelle Bachman's). After college, I moved to the DC/Baltimore metro area and then moved to Boston where I earned my master's degree. I currently am a journalist for a small town paper in rural Minnesota.

I tell stories for a living. I've told Bubba stories and Bubble stories. People just want to tell their story.

Have you heard of the 'Humans of New York' Facebook page? A photographer takes people's portraits and allows them to tell their story. They are full of joy, sorrow, heartache, and happiness. Even though they are in a "Bubble," they are human, just like you and me. It's one of the most positive places on the internet.

You can see that there is a number at the top of this letter. I challenged myself to write 500 letters this year. I've gotten requests from both my Bubba friends and my Bubble friends. Everybody enjoys getting a letter, no matter where you live.

As a preachers, I would hope that you realize that Jesus didn't come for just the Bubbas or the Bubbles. He came for everybody.

You seem like a nice person, Mr. Huckabee. You're a talented guitar player and are probably very generous.

I hope you don't run for president with the current Bubba versus Bubble mindset. That doesn't help anything. I hope you change your tone to one of compassion, hope, and love.