500 Letters: Something to hold on to 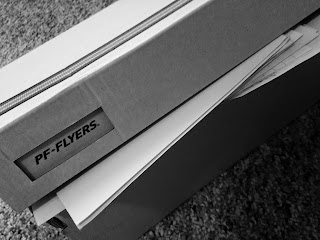 I have this box. It's a shoebox that a pair of PF Flyers came in. It's full of letters, notes, cards, and
photos. It's overstuffed. I am the only one who browses through it. It is what I would save if my building caught fire and I could only take one thing.

That box has probably two or three years worth of letters in it. There are a few other boxes at my parents' house with high school and college notes and papers, much like the one that sits under my bed right now. I think one box is from Keene and the other had Airwalks (that one's really old).

I kept some love notes from my high school girlfriend for quite a long time. They were in a manilla envelope. I remember the day when I came to the conclusion that I had hung on to them for too long. I went outside and set them all in a bucket and lit them on fire. Five years of photos and letters turned black. Some of the ashes floated away.

I thought about that when I cleaned out my email inbox. Many of the same things that were in that shoebox were also in my gmail inbox: letters of appreciation, thank you notes, love letters. I could have kept them. I had the space, but I didn't want to hold on to them anymore. So I just clicked the little checkbox and hit the little trash can icon. I then clicked the "Empty trash" button and they all disappeared. (I mean there's probably some way Google can get them back, but I really don't care to investigate.) No flames. No ash. Just a few seconds to refresh my computer and it was all gone.

I just finished reading a book called "The Circle" by Dave Eggers. It's a book about an internet company that is basically Facebook/Google/Amazon all meshed together. A young girl goes to work at this place, trying to figure out what it is. Basically, more and more of peoples lives become tied to the company and there are some drastic consequences because of it. Everything is quick, smooth, "convenient", and streamlined. Of course it's much harder to get rid of those online memories because everything is stored on some server and is searchable.

I like my shoeboxes. I like knowing that they can't be hacked. Someone could technically get a hold of them and upload them somewhere, but it would take some effort. When I'm holding a letter, I know I'm the only person in the world reading it.

Those boxes are unorganized, uneven, and uncatalogued. I like my memories that way.