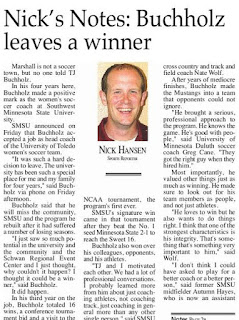 Marshall is not a soccer town, but no one told TJ Buchholz.
In his four years here, Buchholz made a positive mark as the women's soccer coach at Southwest
Minnesota State University.

SMSU announced on Friday that Buchholz accepted a job as head coach of the University of Toledo women's soccer team.
"It was such a hard decision to leave. The university has been such a special place for me and my family for four years," said Buchholz via phone on Friday afternoon.
Buchholz said that he will miss the community, SMSU and the program he rebuilt after it had suffered a number of losing seasons.
"I just saw so much potential in the university and the community and the Schwan Regional Event Center and I just thought, why couldn't it happen? I thought it could be a winner," said Buchholz.
It did happen.
In his third year on the job, Buchholz totaled 16 wins, a conference tournament bid and a visit to the NCAA tournament, the program's first ever.
SMSU's signature win came in that tournament after they beat the No. 1 seed Minnesota State 2-1 to reach the Sweet 16.
Buchholz also won over his colleagues, opponents, and his athletes.
"TJ and I motivated each other. We had a lot of professional conversations. I probably learned more from him about just coaching athletes, not coaching track, just coaching in general more than any other single person," said SMSU cross country and track and field coach Nate Wolf.
After years of mediocre finishes, Buchholz made the Mustangs into a team that opponents could not ignore.
"He brought a serious, professional approach to the program. He knows the game. He's good with people," said University of Minnesota Duluth soccer coach Greg Cane. "They got the right guy when they hired him."
Most importantly, he valued other things just as much as winning. He made sure to look out for his team members as people, and not just athletes.
"He loves to win but he also wants to do things right. I think that one of the strongest characteristics is his integrity. That's something that's something very important to him," said Wolf.
"I don't think I could have asked to play for a better coach or a better person," said former SMSU midfielder Autumn Hayes, who is now an assistant coach for the Towson University women's soccer team.
"I am where I am because of coach B," she said.
Hayes also said she thought about leaving soccer all together during her college career, but that Buchholz, "stood by me the whole time."
The thing that impressed me the most about Buchholz was his desire to build something big. That's not easy to do in a town where soccer takes a back seat to football and volleyball in the fall.
Getting victories is a challenge, but changing a culture to expect victories is a bigger challenge. And doing that all without controversy is perhaps the biggest challenge.
What's his secret? The people.
"I think it's people first. It's always been about the people," said Buchholz. "It's about having integrity and believing in what you are doing. I wanted to bring an energy and passion to Southwest that had been missing for a while."
Marshall may still not be a soccer town, but it is sure a better place due to Buchholz.
Posted by Nick Hansen at 5:09 AM