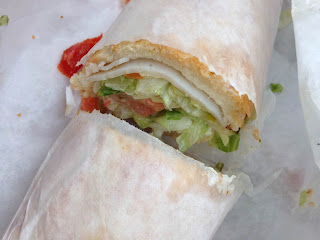 I decided to start the Turkey Club Club back up because I needed a place to write. And turkey club sandwiches bring me joy, so why not start reviewing turkey sandwiches again?


I started my new job in downtown Minneapolis last week. The location gives me ample access to different sandwich places via the skyway. I think I'm going to do it on Fridays to give me something to look forward to during the week.

I chose Potbelly for my first venture. I'd eaten there before in Madison during a quiz bowl trip in high school. I remember one of my classmates talking about how great the Potbelly sandwiches were. I don't remember my initial impression, but it wasn't memorable.

There is one in the building over from my work, so I thought it would be a convenient place to start. The first thing I noticed was the long line. If there is one thing I hate as much as I love turkey sandwiches, it's lines. However, the line moved quickly because they had a guy with a tablet taking orders as people got into line. It was a nice surprise. 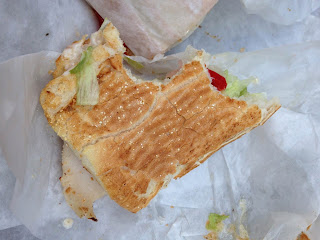 I ordered the turkey with everything. I got the full sandwich (about 9 inches) with everything on it. It came to $6.65. Not a bad deal for a decently size sandwich. It came with lettuce, tomatoes, onions, pickles, peppers and cheese.

The first thing I ask whenever I get a sandwich is, "Could I make this better at home?" Nope, the bread definitely made the meal.

I noticed it had some good heft. It felt like I was getting a good amount of sandwich. I really liked the sub-shaped bread. It was warm and had a nice crunch to it. It was big, but not to fluffy or chewy.

The other thing I noticed was the good spice. I like a little heat on the sandwich and this one definitely delivered. The veggies were crunchy and didn't feel like they were sitting out all day.

However, there was one major thing wrong with this sandwich: the meat. It was slimy and tasted like the cheap stuff you get at the deli counter. The slippery taste really didn't feel right in the middle of the crunch and warmth. It was also a bit messy. My hands were kind of oily near the end of the meal. (Or I could also just be a slob.)

Overall, I'd give this a 2.5 out of five. It was a decent price for a better-than-average sandwich. However, I don't think it will be placed in the regular rotation.
Posted by Nick Hansen at 4:38 AM