I'm happy with how this turned out. I heard about Greta's story a few weeks ago and I'm glad she was willing to share it with me. She's extremely mature and well-spoken. (Much more than I was at 18.)
-----------

MARSHALL- It started with a cough. That's what sent Southwest Minnesota State volleyball player Greta Geist to the hospital. That's how doctors found the tumor pressed against her upper right lung. That's how she found out she had cancer. And that's how she rallied her future team.

Photo by David Merrill
Greta Geist, a freshman on the Southwest Minnesota State University volleyball t
Geist was diagnosed with Nodular Sclorosis Hodgkins Lymphoma (NSHL) last February while a senior at Burnsville High School.
"The scariest day was the very first day in the ER," she said while sitting on a couch in the coffee shop at SMSU recently.


A doctor told her she might have cancer but was sparse on the details initially.
She didn't know what to do but go play volleyball.
"After she got her diagnosis, she raced home and changed into her volleyball clothes," said her father, Harry Geist.
About 150 miles away in the RA building on the SMSU campus, her future team was finishing a spring workout. Coach Terry Culhane received a text from Geist about her diagnosis. The whole team was shocked.
"I've never had a player diagnosed with cancer. You don't expect young kids to have cancer," said Culhane.
She was placed in the hospital for 10 days and had to go through three exhausting cycles of chemotherapy. Even though NSHL has an almost universal cure rate, it didn't make the fight any easier. She cut her long blonde hair and donated it to Locks of Love.
Geist remained steadfast during her treatment. She did her homework while receiving chemotherapy. She attended volleyball practice, even though she fell asleep on the sidelines at times. Her favorite part was when she was able to get back out on the court during the last week of her treatment.
"Volleyball was a really important part of her focus," her father said.
In Marshall, Geist's future teammates made her a focus of their spring play. During a tournament at South Dakota State, they wore violet T-shirts, the color of Hodgkins Lymphoma awareness, emblazoned with the words "Team Greta."
The team gave Geist a tie blanket and a homemade poster that had the Mustangs logo on it. They stayed in touch with her via text messages and social media.
They hadn't even played with her yet. But that didn't matter to the team. 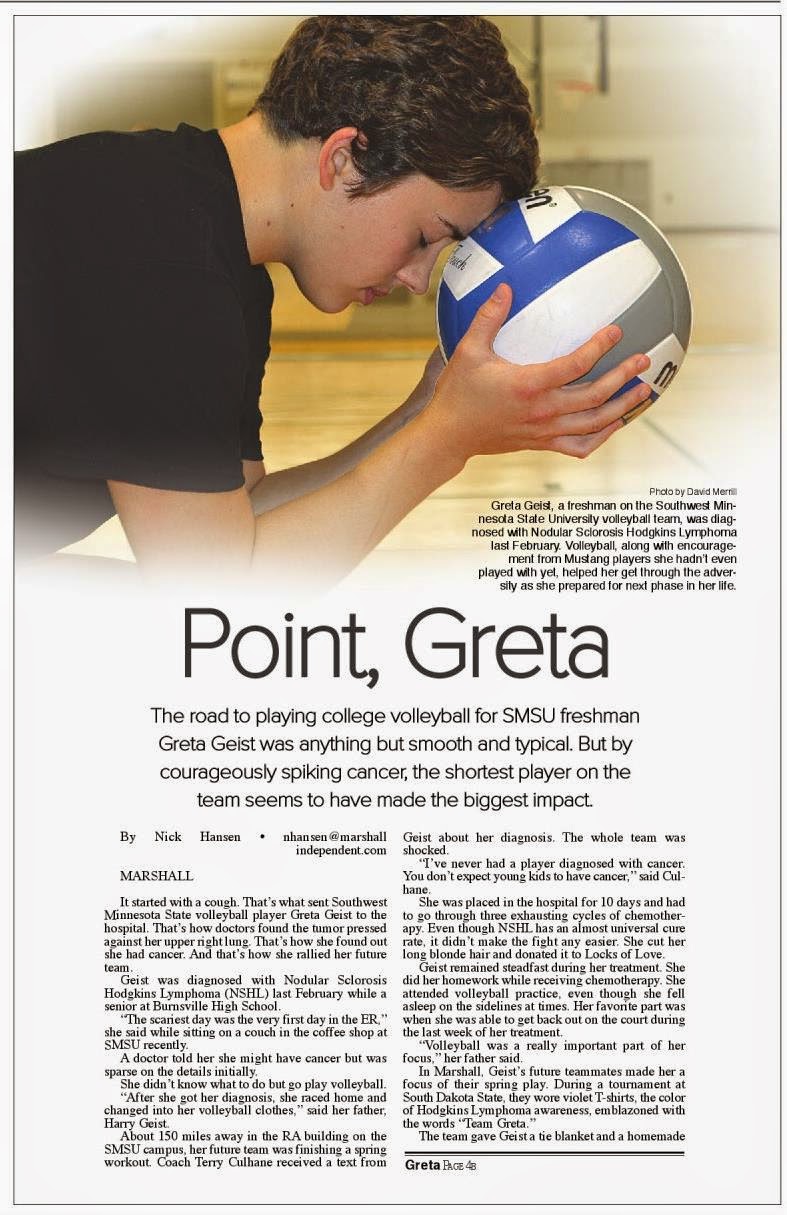 "It's a future teammate," said SMSU volleyball player Emilee Gutzmer.
Gutzmer and Geist met up for dinner over spring break near the Twin Cities. The meeting came in the middle of Geist's chemo treatment, but Gutzmer said Geist was extremely positive.
"It looked like nothing had fazed her," said Gutzmer. "She said that she'd be at practice next fall."
The support from SMSU, Geist's club team, and the greater volleyball community was overwhelming for the Geist family. Geist's CaringBridge blog received dozens of notes of support from all over the country.
Harry Geist was especially humbled by the support from Marshall.
"They basically told us that once you're committed to us, we're committed to you," he said.
Soon after that, she got back on the court for a tournament with her Northern Lights club volleyball team. Even though her team lost two of their strongest players to injury, they still placed third.
"It took a lot out of me," she said with a smile.
Geist's bout with cancer was unexpected, but she's come away with a better appreciation for the expected, like school and volleyball.
"If I think I'm tired and I don't want to go to practice, I realize that that's stupid," she said with tears starting to form in her eyes. "If you didn't get to go somewhere, you wouldn't realize you'd miss it."
A long way from a cough.
http://marshallindependent.com/page/content.detail/id/560137/Point--Greta.html?nav=5021 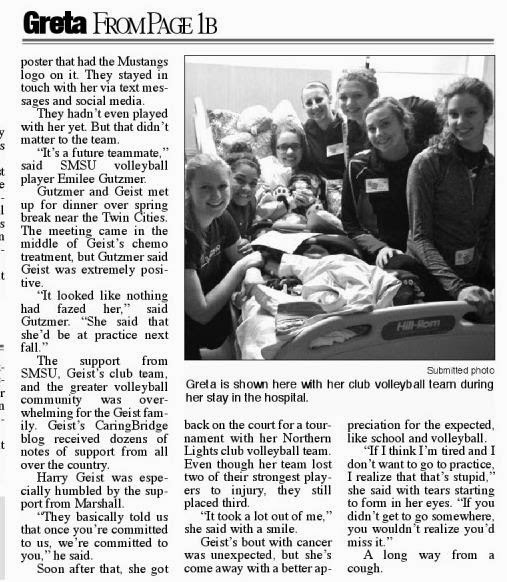