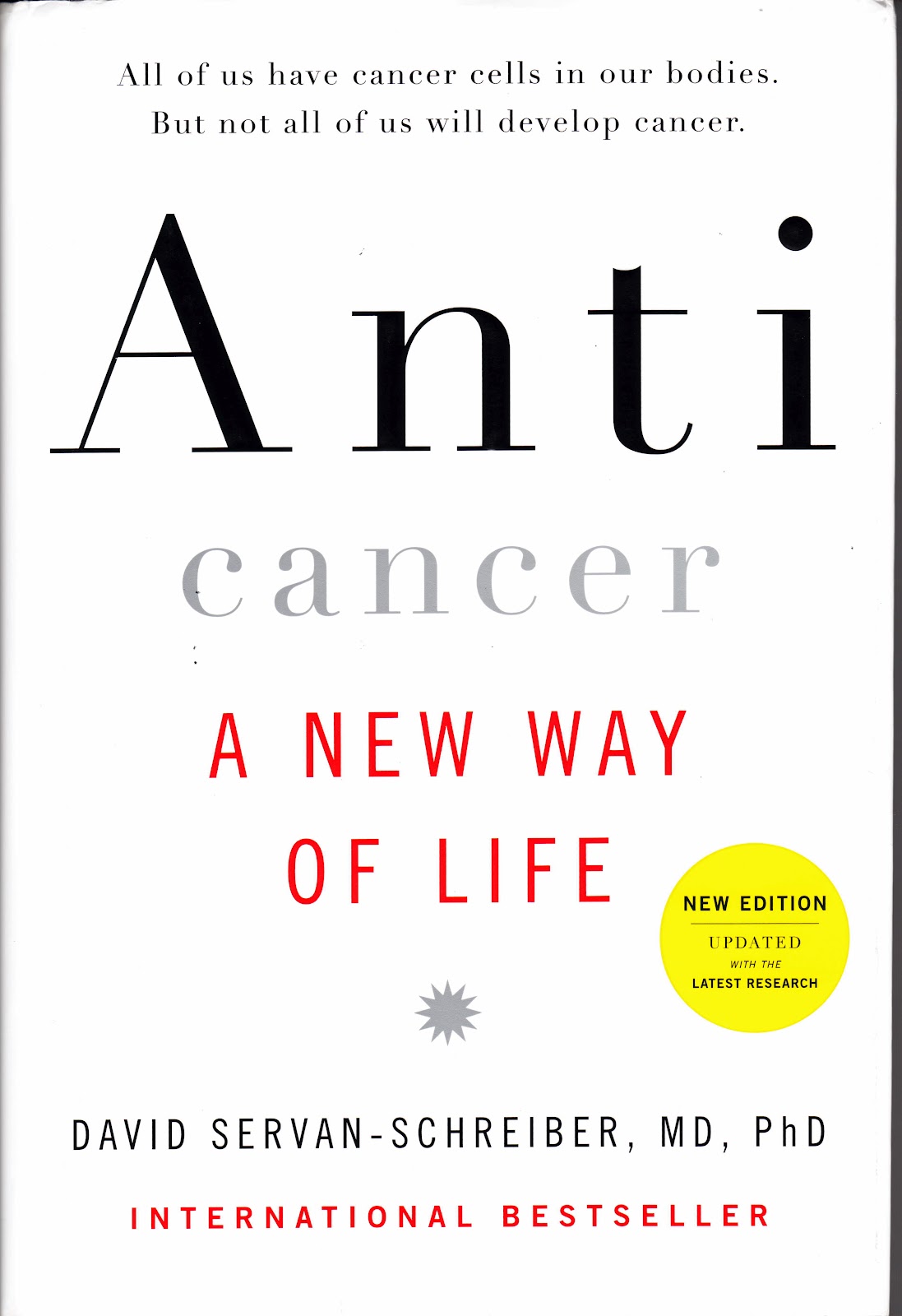 Book three is in the books. I just finished Anti-Cancer: A New Way of Life by Daivd Servan-Schreiber, MD, PhD. My Aunt Betsy recommended it to me. This one was a tough one to finish, not because it was difficult to read, but because of it's subject matter.

To put this in context, my Aunt Betsy's partner, my Aunt Martha was diagnosed with lymphoma a few months ago. She has been valiantly fighting the disease, but the cancer persists. They both read the book and thought it would be good for me to get get a peak into what they are going through.

Anti-Cancer was written by a doctor who was diagnosed with brain cancer. His book talked about lifestyle choices and how they affect the growth or inhibition of cancer cells. These included things like diet, exercise, spirituality, and personal.

The food portion was particularly interesting. Green tea is major cancer-kicker. It has a bunch of polyphenols which slows down the growth of cancer cell vessels. (I've been drinking a lot of green tea lately.) The author recommends a diet rich in whole grains, legumes, and fresh fruit. They don't recommend a lot of meat or eggs. That's basically been my diet since grad school, so I'm feeling okay.

The portion on the "anti-cancer" mind was also very intriguing to me. One of the last lines in the book said that, "It is very important that we define our most authentic values and put them to work in our conduct and in our relationships with others."

That line made me think of the other weekend when I was at a pub with a few of my friends enjoying drinks and watching the NBA All-Star weekend festivities. My friend, Andy Bunker, and I were seated by a gentleman who was there by himself. We made some small talk, but the guy kept talking about how he worked in finances and how much money he made this past year. He also made a point of taking out his gold lighter that he said was worth a few thousand dollars. He kept saying how much his life sucked. I didn't have nearly as much as that guy did, but I felt pretty happy.

I'm in a fair amount of debt, I don't have a lot of things, and I eat pb&j for lunch almost every day. I'm also a  pretty happy guy. I told the guy that I had friends who were helping me move on Monday. When it comes down to it, which would you rather have, a gold lighter or friends who will help you move?

I place a lot of value in being honest, heartfelt, and telling those close to me that I appreciate them. I'm glad I got some validation that this is a healthy way to live.

To bring it back to my family, Betsy and Martha threw a "Celebration of Life" party last night. Martha accepted the fact that she probably won't be around too much longer. However, they decided to celebrate a great life instead of despairing over things to come. I hope I'll have the strength to do that when that time comes for me.

Mart and Betsy came and visited me in South Africa and I thought that was so fantastic. They're two wonderful women and I'm glad they're part of my family.