"We gave you strict orders not to teach his name!" 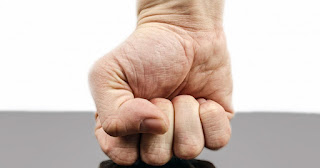 Today's reading from the Acts of the Apostles,  5, 27-33 made me think about who we are listening to and who gets to speak. (Bolding is mine)

When they had brought the apostles, they had them stand before the council. The high priest questioned them, saying, "We gave you strict orders not to teach in this name, yet here you have filled Jerusalem with your teaching and you are determined to bring this man's blood on us." But Peter and the apostles answered, "We must obey God rather than any human authority. The God of our ancestors raised up Jesus, whom you had killed by hanging him on a tree. God exalted him at his right hand as Leader and Saviour that he might give repentance to Israel and forgiveness of sins. And we are witnesses to these things, and so is the Holy Spirit whom God has given to those who obey him." When they heard this, they were enraged and wanted to kill them.

Reflecting on this a little bit, I thought about the council as a representation of white supremacy. Not necessarily the KKK or stereotypical version of that, but the quieter, less obvious white supremacy that I and so many other people who look like me benefit from. The white supremacy that whispers, "He should have just complied with the police" or says they're "just joking" when dabbling in racial stereotypes.

Recently, the Iowa statehouse voted to end "divisive" training on issues like implicit bias or diversity training. Former President Trump signed a similar executive order during his term. I've attended a number of diversity training sessions, seminars, and discussions. Are they all of the same quality? No. But did I regret going to them? Not at all. Even though the Apostles were spreading the good news, the council got so angry that they wanted to kill them! And sadly, this is still happening 2000+ years later: People still literally want to kill the messengers.

What will it take for us to let our guard down and repent? How do we listen to the Holy Spirit and not the human council?

May we allow the flowers of grace and forgiveness to flourish, instead of the bitter fruits of defensiveness and anger.