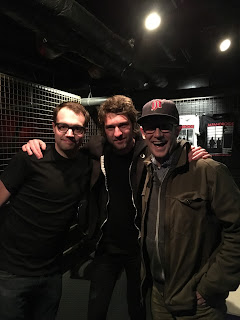 I never understood that saying about jazz where it’s all about “the notes you don’t play.’ I think I can see how that applies outside of a musical context though. In a time where filling our eyes and ears with three or four forms of entertainment all at once, there’s something to be said for those times when we don’t do that. The times you’re not entertained. The times you’re not talking. The times when you’re scared. The times when you’re truly alone, without your devices and on your own. I know that mindfulness is a big buzzword right now. But I think there’s an easier way to achieve that than giving someone your money to tell you how.


On Tuesday, I went to a concert at First Avenue. It was my second concert there in four days. I bought a ticket in order to see the opening act, Craig Finn. But the headliner, The Japandroids, intrigued me as well. I met up with a friend for a beer prior to the show. The two of us didn’t know each other all that well because we had only met through another friend our previous summer. However, we found out via social media that both of us would be attending this show.


We arrived at First Ave about 45 minutes before showtime. We grabbed a few more drinks and headed over the merchandise table just to check what was on sale. Chris mentioned that his goal was to see the band members at least once offstage. I began to talk about something and I noticed that he was looking back towards the merch. “That’s Brian King,” he said, noting that the lead singer had come over. He walked right over, strangely, no one else noticed. I took his picture, and then another gentleman offered to take a picture with all three of us. Goal achieved for the evening.


The only Japandroids song I knew before this show was the single from their latest album “Near to the Wild Heart of Life.” Luckily, they played that one first, which piqued my interest. These guys play a confessional sort of rock, talking about moving on, drinking, lost loves. The more I’ve listened to it this week, the more I’ve liked it. (Confession to make, I didn’t stay through the whole show. Some of us had to work in the morning!)


One thing I noticed though was how many people were on their phones. I’m not talking about taking pictures, recording video, updating their Instagram, or responding to a text from a buddy at the bar  and then putting it away. (I’ve done all of those things at concerts.)  They were on their phones for a good portion of the song, just scrolling away through Facebook or Twitter. I get the documentation aspect of having your phone out, but why would you want to be somewhere else, looking at what other people are doing? You are out. You are doing things. You are exemplifying what a lot of people wish they were doing.


I’ve underrated how great some concerts are. You’re not at work. You’re not at home. You have literally no responsibilities other than to take in a show.  Why can’t we just do that? There were a few times when I found myself with a little slice of serenity in the middle of a raucous crowd.  I was where I was supposed to be, and that felt great.
Posted by Nick Hansen at 5:30 AM