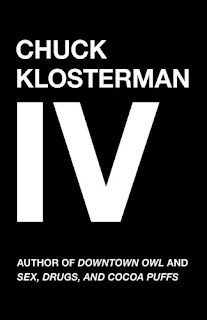 I'm glad people are keeping me to task with this project. I've fallen a little bit behind, but I'm hoping catch up and get ahead over the next few weeks.

This book was IV by Chuck Klosterman. It's a collection of feature articles, essays and fiction by him. He's written for a bunch of national media outlets and I've been a fan of his for a while. My grad school buddy Jason Lind recommended this to me and it was relevant because we're both in the sports writing program. (Klosterman does some writing for the website Grantland.)

The thing I like about Klosterman is that he can take some weird subject and paint it with such quirky details. My favorite story was "That 70's Cruise" about his time on a Classic Rock cruise that featured Styx, Journey, and REO Speedwagon. He describes the feeling of the ship like this:

"In 2005, the members of Journey are just dudes who used to be on MTV; the are musicians because music is their job. It is how they pay their mortgage. And people fucking love that."

I love that sentence. It's good reporting plus a unique perspective. How do I write like that? Klosterman was actually born in Minnesota, cut his teeth at a newspaper, and eventually got to writing for NY Times, Rolling Stone and a bunch of other great places.

I love Klosterman's work, but I don't think I want to be a journalist like him. I have that problem where I mistake admiring someone with emulating someone.

Keep writing, I guess. However, something is nagging me that I'm not meant to take this path of a journalist turned essayist.

It's all in the details. That's the key message I got out of IV. Keep observing things and a good story will come.